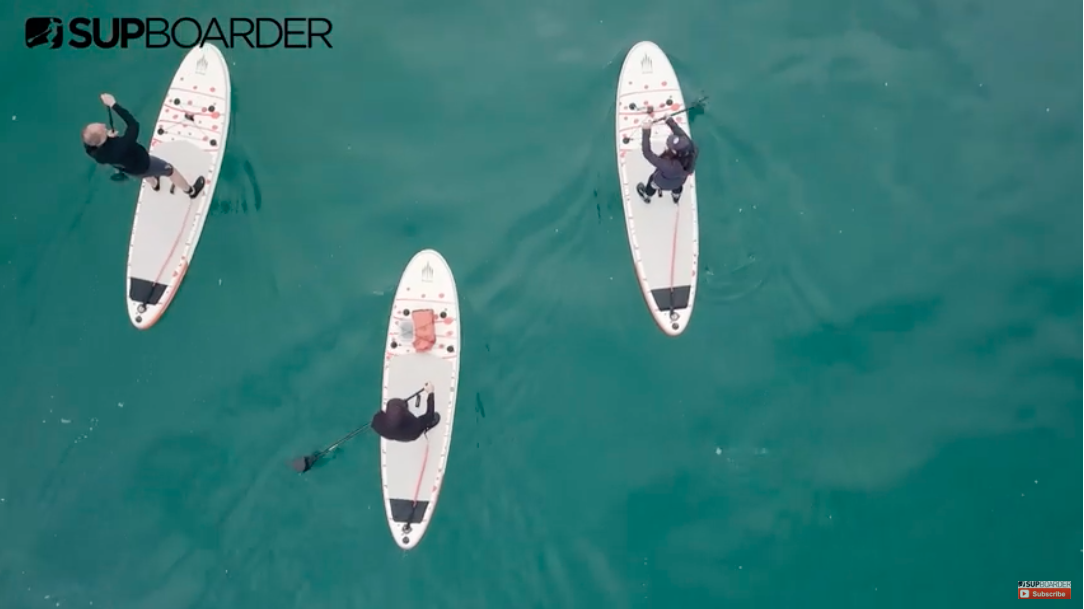 Last month we were delighted that Harry Newton of SUPboarder Magazine met Paul Cox from The Shark Trust and Clare Baranowski, a Marine Biologist, on a beach in Devon to do a little paddle boarding whilst they learned more about many shark species, shark eggs and what to look for, and what we can do as a community to help support sharks in the ocean and ensure their numbers stay safe. Watch the film they made or read this blog which summarises their conversation to find out more.

The Shark Trust is a UK based shark conservation organisation. We’ve been around almost 25 years now. Based and started in the UK, we work on shark conservation across Europe and with partners in the United States as well. One of the projects that we work on is looking for egg cases that get washed up on the shore. Some shark species and skate species lay their young and they start out in these leathery egg cases. They leave them where they are. And then when the young emerge, break their way out and go and live their life, the egg cases get washed up on the beach. We then collect records of them from people who phone us, use our mobile app or our online recording platform. Members of the public sometimes even post them to us!

We do this to look at their distribution, where are they occurring? Does that correlate with where there might be breeding grounds, or certain areas where sharks and rays might be laying their eggs. We then feed this information into marine protected area consultations. So anywhere in the world, if you find something that looks like this (shark egg case), then contact The Shark Trust, or go online and record it. 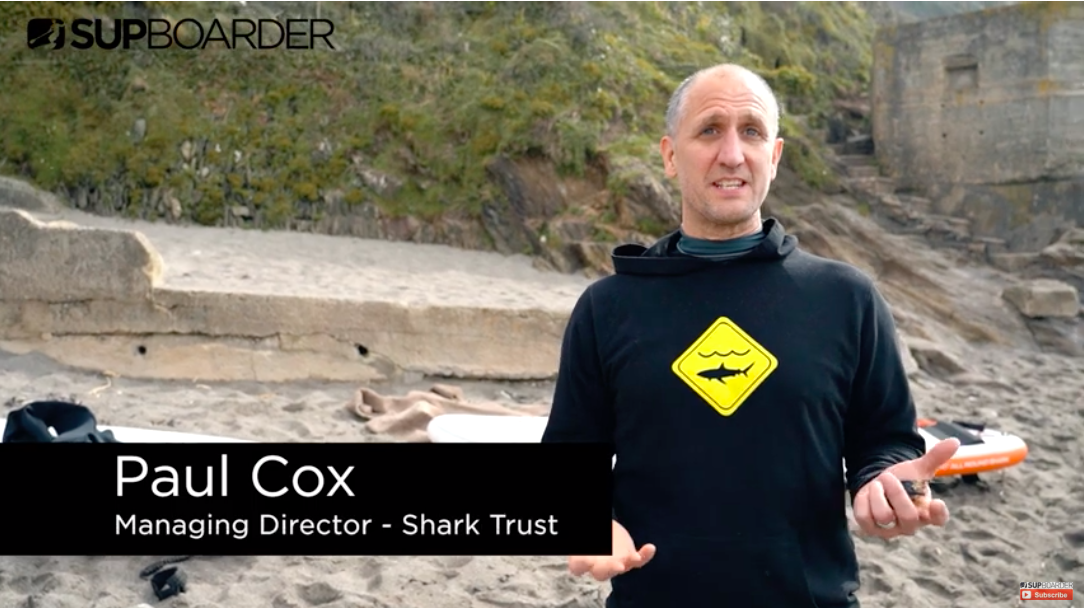 Due to lockdown, there’s been a boom in the SUP industry. And lots more people are getting on the water. And something that we’ve been quite quick to highlight is about interactions with wild species. So we want people to go to the beach, pick up trash if they find it, and pick up egg cases if they find them. But when they’re actually on the water and exploring the new environment, we really, really want people to start and understand how not to disturb wildlife.

If you’re SUPing, that’s the one way you’re likely to spot wildlife in the sea, although it’s hard to spot sharks because they’ll see you way before you see them and they’ll go!

So actually, we publish a code of conduct for the most popular, Basking Sharks. It’s for the sharks, and it’s for the water users as well, to make sure that everyone can have a positive interaction and we’re not harming or disturbing the sharks. And we’re also not putting ourselves in danger. So for Basking Sharks, as an example, and I suppose this would relate as well to Whale Sharks in other parts of the world, the key is about sitting back and letting the shark do its thing. If a shark is searching out the concentrations of plankton, because they’ve got to get maximum efficiency to feed this massive body and you paddle across its feeding path, you’re potentially disturbing its feeding. So we’d always say kind of hold back.

If you’re a group like we are, then stay together, don’t spread out around the shark, because you’re kind of cutting off options for it. Stay at least four meters away, don’t try and get in and touch it. Allow it to go about its business, and from a safe distance observe it, and enjoy the experience, take some photos. Basking Sharks are a really interesting one – you can get photos of their fins because we’ve got a fin ID database. So focus as much on getting a really good photo as on the experience itself. And then it could be really, really useful.

The big issue around shark conservation is overfishing. There are other problems like climate change and plastics pollution and habitat destruction, and all these things do affect different species in different ways. But they’re like the backing singers, and the lead singer of the problems for sharks is overfishing. If we could just get science-based fisheries management in place, then that would enable us to take a big step forward.

But there are simple things that everyone can do to help protect sharks – and one of them is data collection. The Great Egg Case Hunt is one thing that people can do. Anyone could do it. You don’t even need a paddleboard! You can go and just kick around on the beach, find egg cases and report them. If everyone reports them, then we’ve got 300,000. That’s a dataset, and that’s really useful. 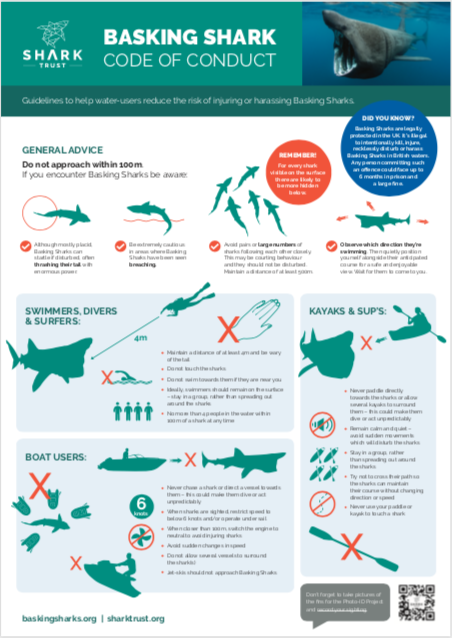 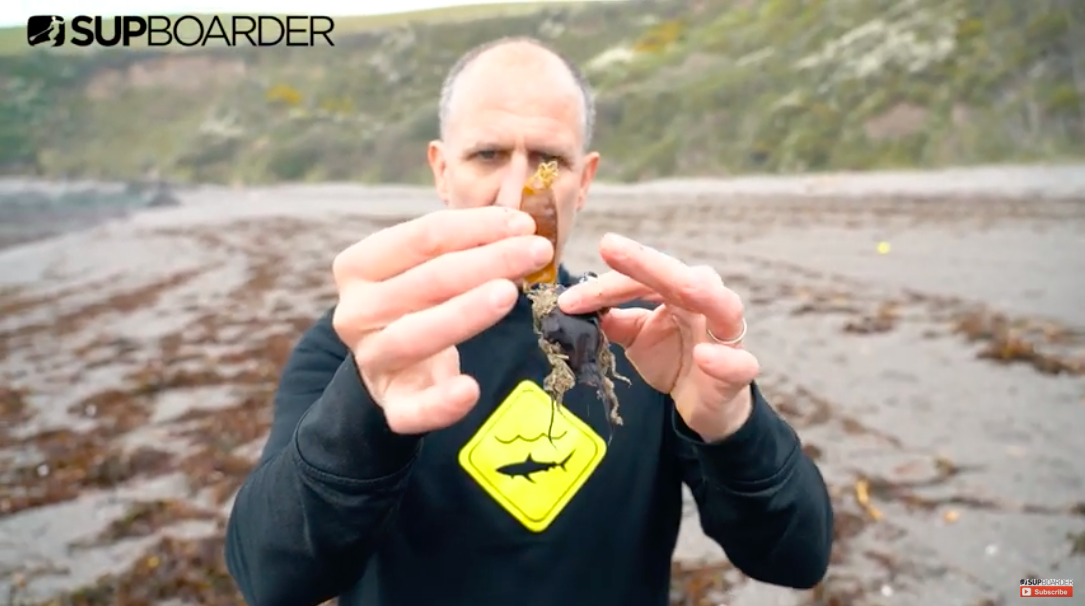 So now we’ve paddled over to this little beach here. What we are going to be looking for some egg cases, shark egg cases and ray egg cases as well. Is that right,

There are skates and rays. And there are many people who argue about what defines a skate against a ray. But we look at it as the skates are the egg-laying ones. So the skates would be the ones that would live as bottom dwellers. And they lay these, the skate eggs are wider. I always think they look a bit like Lego Batman. They’ve got ‘horns’ on both corners, and they lay them on the sandy or gravelly seabed.

When they lay them, they have a sticky like mucus all over the outside. And they roll around a bit on the gravel, get really heavy and weighed down, and then they sit there on the seabed. And then when they empty out, when the young one emerges, then it becomes light and it gets washed up. The skate ones are wider and they have horns. The other ones that you can find are like the little sharks, and they are narrower.

So, here we go, we’ve got some here. So that’s a skate one. So you got these horns, and then that’s a catshark. A small spotted catshark, which has these twirls so that when the female lays it, she’ll wrap it around and around the seaweed. 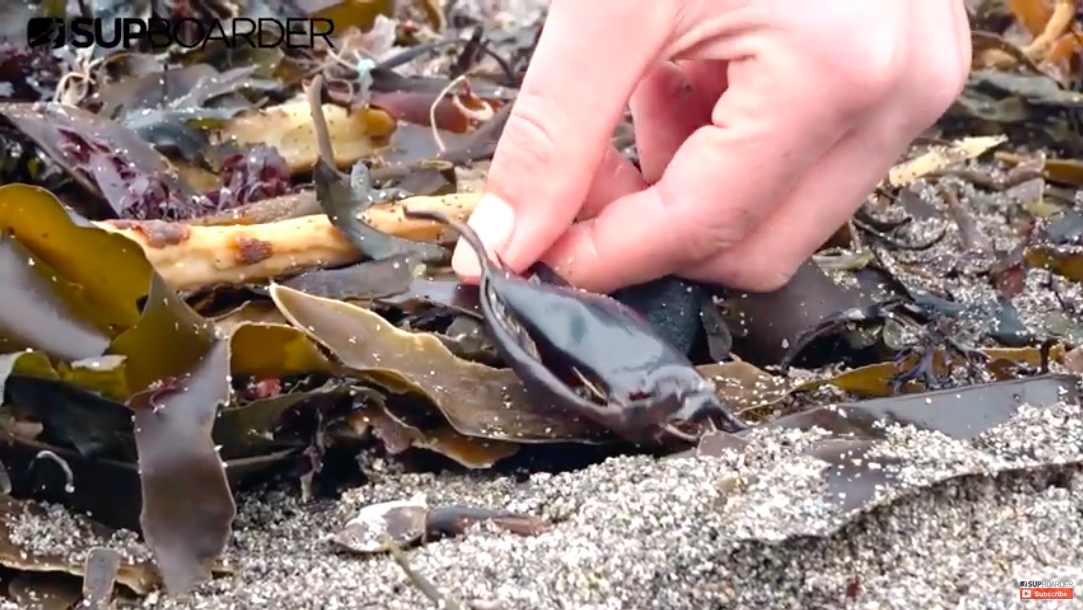 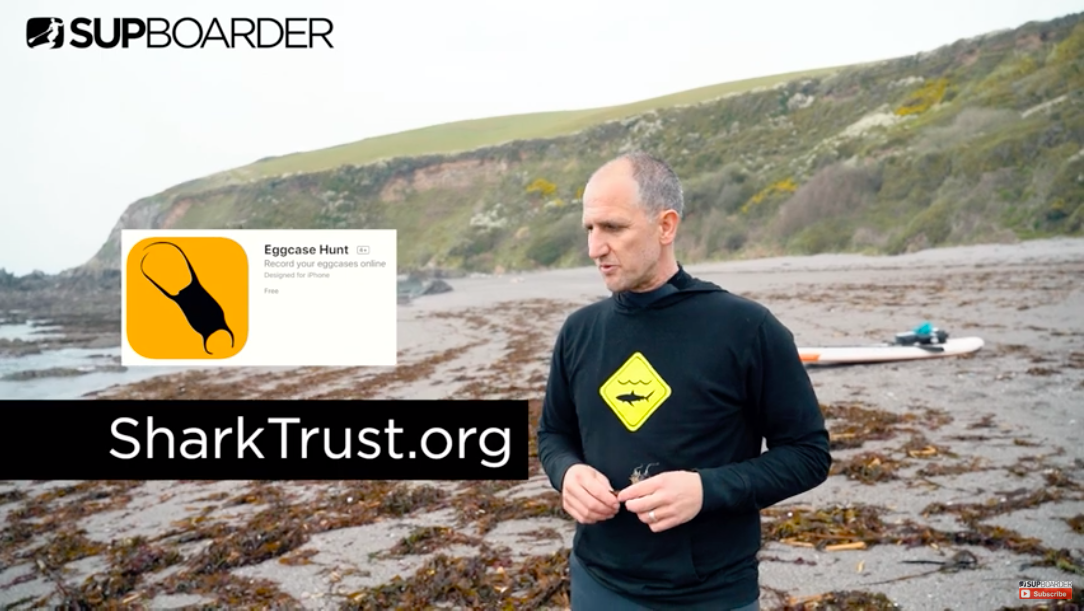 So if you’re paddle boarding over a kelp bed or something, it’s really worth looking down carefully without falling off, like I did. Looking down you might be able to see them in situ. If the light catches it right, you can sometimes see the little one wriggling away inside. Don’t touch it!

But the ones on the beach, they’re empty?

The ones on the beach are empty. Sometimes people will find ones on the beach that have something in it. And if it’s alive, you can tell if its alive straight away because it will wriggle, just get it back in the sea. Put it in a rock pool or somewhere, don’t be tempted to take it home and look after it,  just put it back in the sea. Most of the time you can tell if they are empty, because they’re light as a feather.

So we’re going to have a little look around here. You quite often get them right at the top of the tide line where you get the really extreme high tides, and you’ll get them in amongst the rocks and so on. But just poke away through the strand line and get your eye in. And then if you find them, you can identify them. You go on The Shark Trust website, or get the app on your phone, which is really good. Take a photo of it, identify it, and report it.

Yeah that’s a lovely one, it’s in really nice condition.

So I don’t actually know the ID of this,

Yeah. That is a nice one.

So can you identify that one? 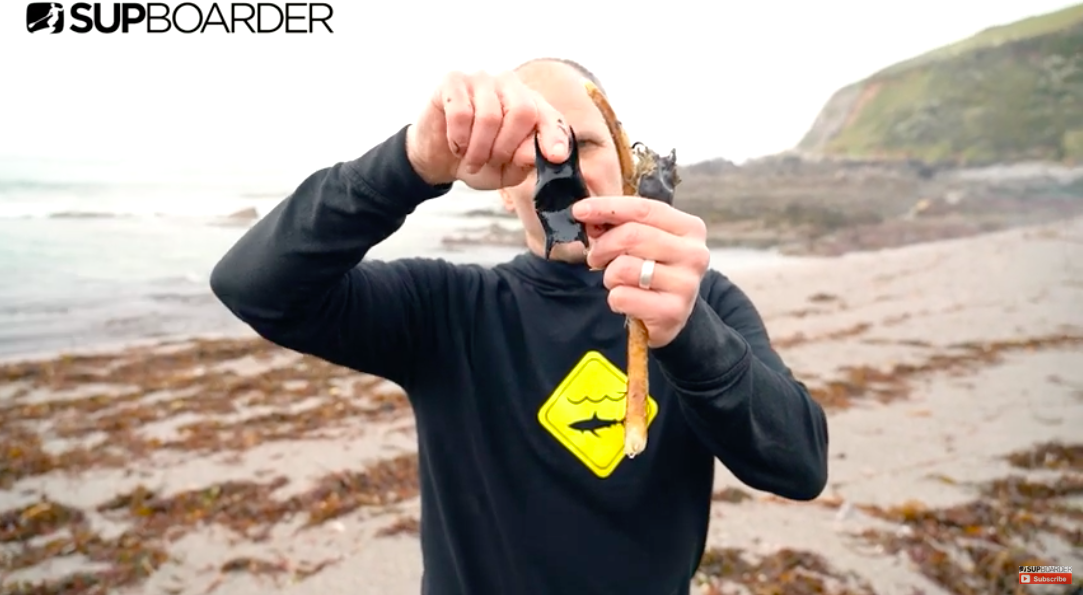 So SHARK SUPs have brought us here today, who have partnered with The Shark Trust. Can you tell us a bit more about what that means? What does that partnership mean, and what’s it doing for you?

When SHARK SUPs went through a rebrand and redesign exercise, they contacted us and they wanted to connect the brand with ocean sustainability issues and so on. We’re always trying to bring out diversity. We’re always trying to talk about the diversity of sharks, because a lot of people focus on the big five. Like the Great White, Hammer Head, and Bull Shark. And we always want to talk more broadly about sharks. So when they built that into the design, if you look at like these boards we’ve got here, they use subtle patterns from a variety of shark species to represent the range of the boards.

So we’ve got the Touring SUP here, which has the Whale Shark pattern on it. We’ve got a Windsurf SUP over here which is a Zebra Shark, because the zebra shark has this big long tail representing the sail of the windsurfer. And then you’ve got the All Round SUP, which is from the Epaulette Shark. If you’ve never heard of an Epaulette Shark, or never seen one, check them out. They’re amazing. They’re these cool little sharks, they’re only about so big. And they’ve got these big eye spots on the side of their body. And what’s unique about them is that they walk. So the Epaulette can actually use its pectoral fins to walk. They’ll come and walk out of the rock pool, where they live, and walk over the rocks back into other pools. So they’re a very cool little shark. They just kind of break all the rules of sharks. 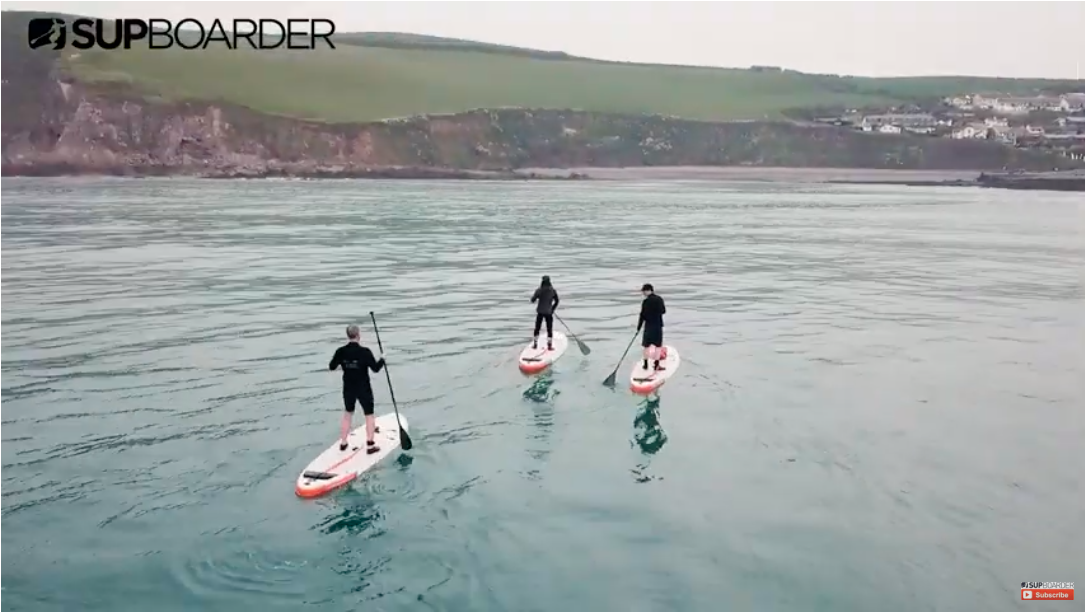