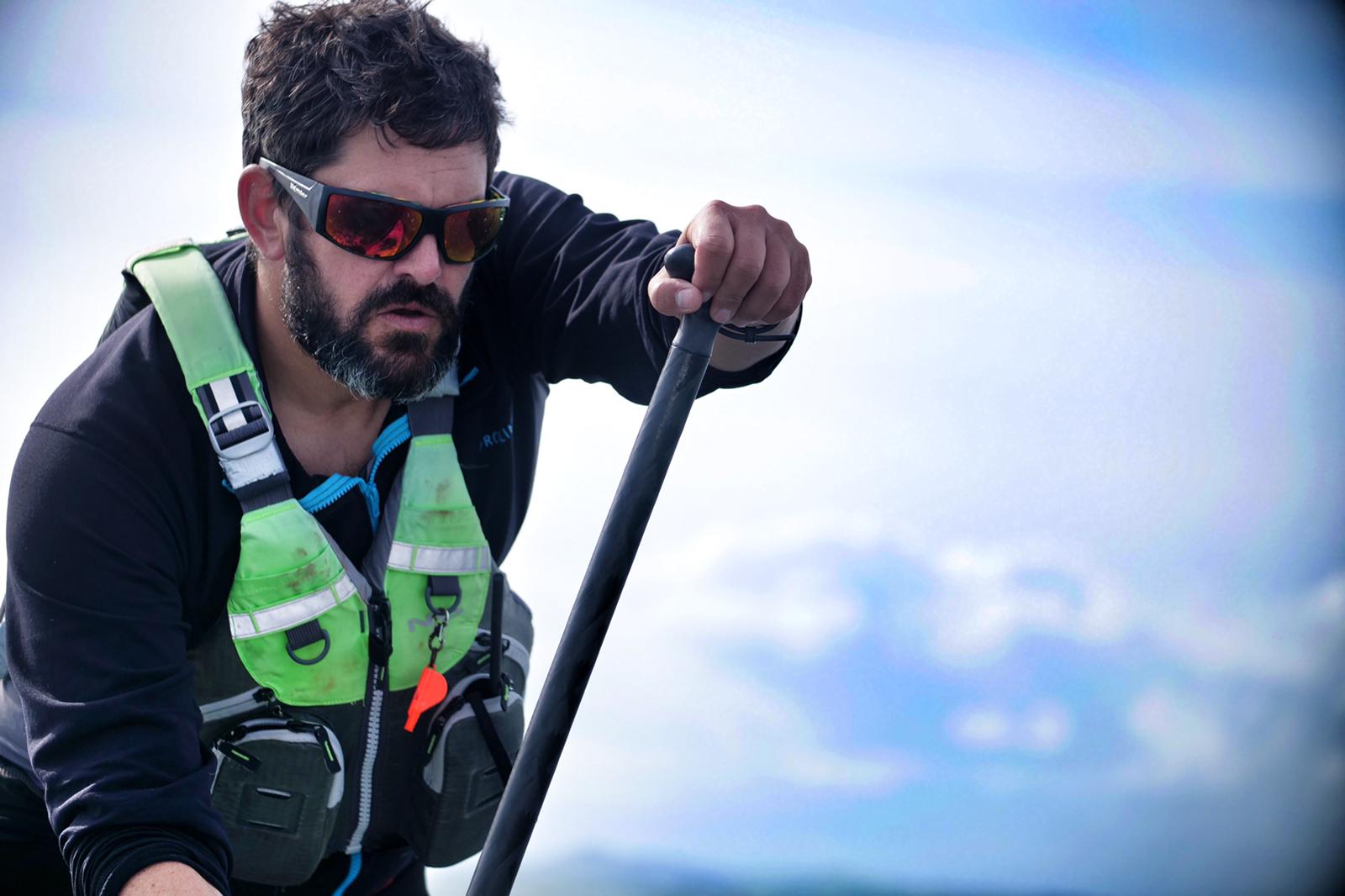 On the weekend of the 26th July 2020, Jordan Wylie (36) from Blackpool, Lancashire began his attempt to be the first person in the world to SUP around Great Britain, a complete circumnavigation of over 2,000 miles of paddling. He did it with the intention of raising over £100,000 for the charity, Frontline Children in order to build a school for refugees in Africa.

Jordan, who is no stranger to risk or danger, served in the British Army for 10 years, and ran through the 3 most dangerous countries in the world in 2018, which was also the subject of his latest book; Running For My Life. Last year he completed another world first when he rowed across the perilous Bab El Mandeb Straits, the gateway to the pirate infested Gulf of Aden, coined the most dangerous stretch of water on the planet.

In 2020 Jordan was scheduled to run marathons in the 10 coldest places on earth but having completed Siberia, Yukon, Alaska and Iceland, his plans came to a grinding hold on his way to the North Pole when the world went into lockdown as a result of the coronavirus pandemic.

Then later that year after 149 days, seven hours and 36 minutes of paddling covering 23177.29 km of which became the longest stand-up paddle board journey in history via open water, the Great British Paddle also sadly came to an abrupt end following the introduction of Scotland’s lockdown restrictions. But this doesn’t take away from the challenges he faced in getting to the top of Britain (only 25km from John O’Groats – the most northerly tip) before coming back down the other side.

Jordan, who is also one of the stars of Channel 4’s BAFTA nominated and award winning shows Hunted and Celebrity Hunted, is on a mission to inspire young people by building a school for refugees on the Horn of Africa that have been displaced by the conflicts in Yemen and Somalia. He hopes The Great British Paddle can contribute towards the £100,000+ he has already raised in the last 12 months to finish the school build which is now well underway. So far, he has raised over £82,000 for frontline children from this project and hopes he can push closer to £100,000 in the coming months to get the school built.

We were delighted to be able to have a chance to chat to Jordan about his paddle boarding experiences and why, for now, the adventure was halted half way. 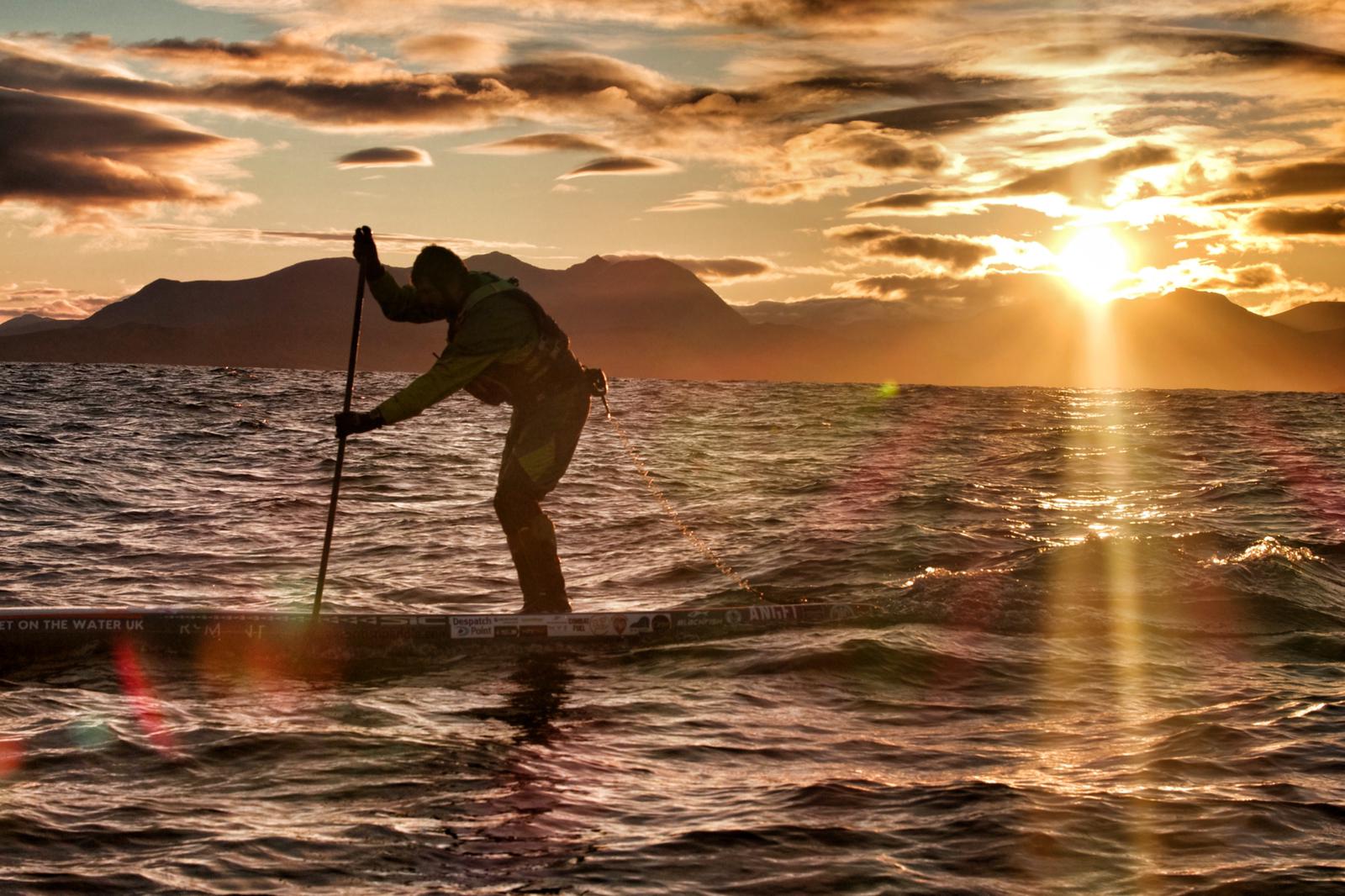 What inspires your spirit of adventure?

I’m an adventurer and that’s what I do for a living. I go on adventures around the world and try my best to inspire young people using the spirit of adventure. Most of my adventures have a charitable cause which involves trying to support education of children in war and conflict zones. I’m a former soldier, so the one thing that has always stayed with me from serving in conflict zones was the plight of the children and what they go through. So I always wanted to go back and try and make a difference to their lives when now I’m a civilian and I try and use the spirit of adventure to do that. And at the start of the year, so it’s been my mission for the last few years is to build a school on the horn of Africa for children displaced by conflicts in Yemen and Somalia. 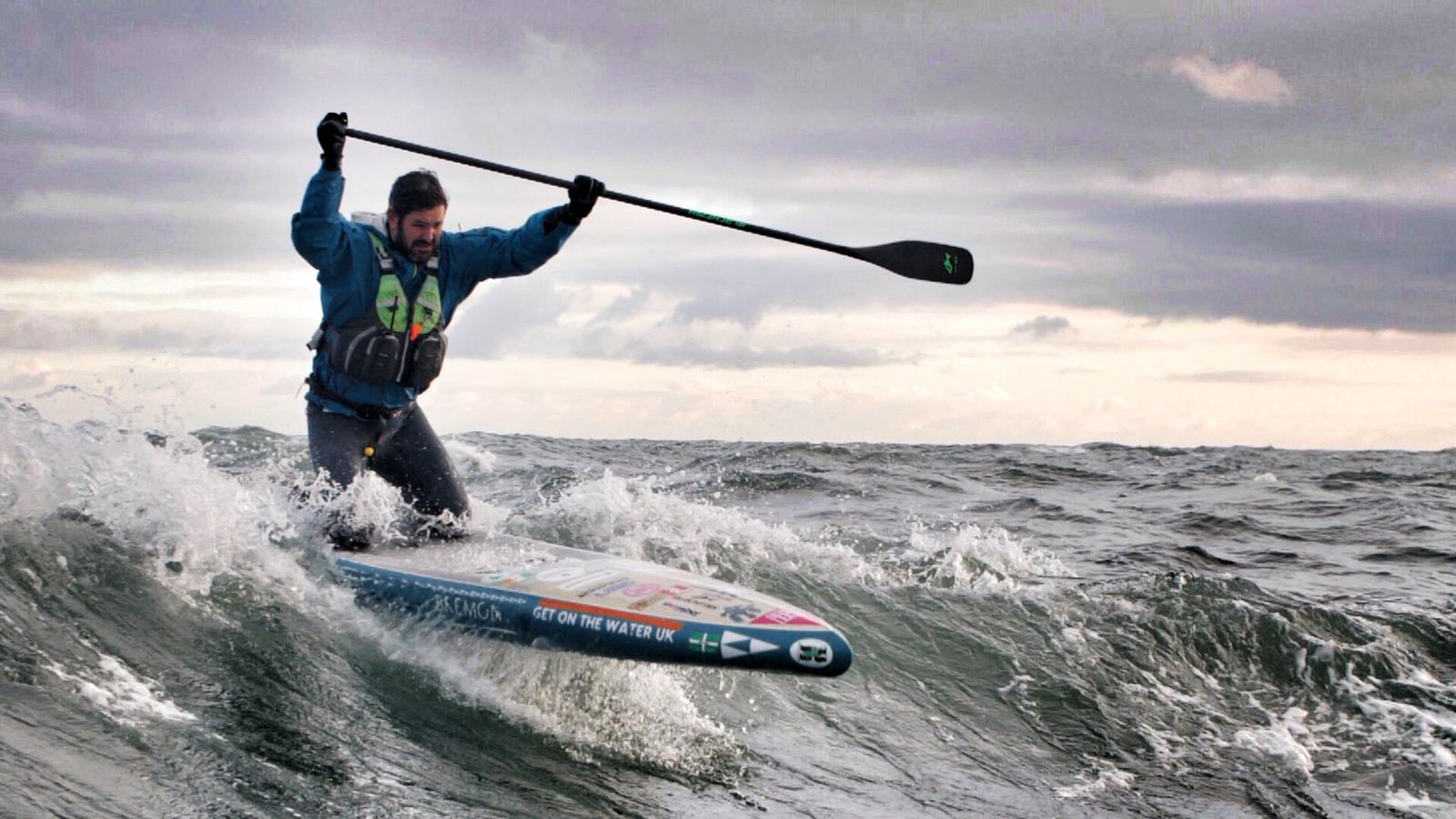 How did you decide to raise the money?

So I needed to raise a further a hundred thousand pounds to complete the school build. A few years ago, I did a project called Running Dangerously where I run through the three most dangerous countries. I run through Iraq, Afghanistan, and Somalia in 2018. And then in 2019, I came up with a project called Rowing Dangerously, which was a world-first row across the Gulf of Aden, quite a dangerous area of water. And then at the start of last year, 2020, my idea was to go running again, and the project was called Running Dangerously, the polar edition. I basically wanted to run 10 marathons in the 10 coldest places on the planet. So, in January, February, March, I did the first four. I did Siberia in Russia, I did the Yukon in Canada, Alaska, and Iceland. And then I was on my to the North Pole in April, and then we went into a lockdown. So I still had six months to go, well, I couldn’t do the North Pole and I had to stop that.

What did you do in lockdown?

In the first lockdownI I sat at home getting frustrated like everybody else and my mental health was deteriorating. I’ve been on medication for about four years for anxiety and depression and my mental health became really challenging. So I was thinking, “How can I continue to fundraise, but do it safely?” Then when the restrictions were lifted after the first lockdown, I started paddling. I started doing a bit of paddling on my local river in Hampshire and Basingstoke and that was the first time I’d really started taking up paddle boarding, to be honest. I thought, “Do you know what? Wouldn’t it be great to use paddling because it’s good for my own mental health; blue therapy.” I thought, “Why don’t I try and come up with a paddle boarding expedition?” I’m always looking for ways to be innovative, creative, and do things that haven’t been done before. I thought “nobody’s successfully circumnavigated Great Britain yet so why don’t I try and be the first person to do that and capture the imagination of the public who will hopefully sponsor it and engage with it.

So how did you train for the expedition?

On the 26th of July and literally I had a week’s training with the Water Skills Academy in South Wales and that was the first time I’d ever been on the ocean. So I learned the hard way at sea throughout. I’ve done lots of extreme adventures and expeditions around the world, but this for me was the most enduring thing I’ve ever done and if I’m honest, I was quite naive in how long I thought it would take me. I thought that I could be done in less than a hundred days to do the full expedition and what I didn’t account for was the fact that I wouldn’t be able to paddle every day.

Sometimes there was storms that stopped me for seven days and nine days. And we had storm Frances, storm Ellen, and I just thought I’d be able to paddle every day and just thought I wouldn’t be able to make as much progress on the tough days, but I think out of the 150 days I was at sea, I think maybe 84 of them I think were actual paddle days.

With hindsight, do you think you would have undertaken the challenge?

I learned a lot about myself on the expedition. I think if I’d have known what I was going into, I probably wouldn’t have done it. Somebody once said, “Be naive enough to start but be stupid enough to finish.” I think if I’d have known what I know… maybe not! A lot of very good paddlers and professional paddle boarders in the industry said, “You’re crazy doing that.” And I thought, “Well, not that crazy,” but actually I come to realise at the end, they were pretty correct. 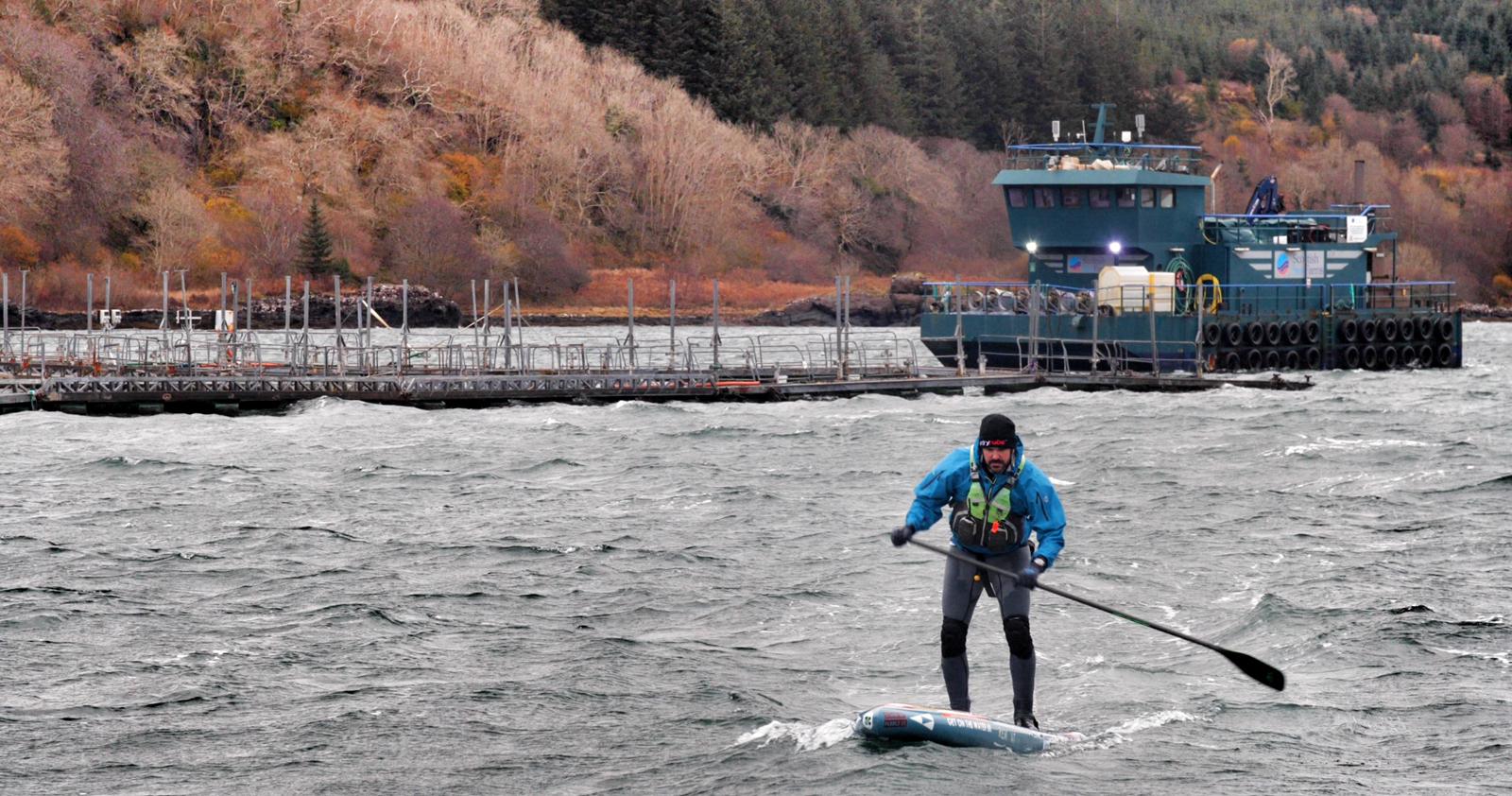 So what brought the challenge to an end?

It was our 150th day and we got a phone call from the Scottish government saying that Scotland was about to go into a national lockdown. We were classed as a leisure craft with our support, but we wouldn’t be able to just keep entering different ports and marinas willy nilly, of our own free will because they were all going to be in lockdown with only the key workers manning them. I wrote a letter to the First Minister of Scotland, Nicola Sturgeon, and I just said this is what we’re doing, this is the cause, we’ve taken all the measures. I sent my risk assessment. And I said that we’re living at sea and we only ever come in for emergencies or to replenish fuel and rations. We don’t really see anybody at all and unfortunately I got an email back saying that ‘we understand, it’s a great cause but unfortunately, this is the legislation and you would be in breach of it if you were to continue.’ So, it was frustrating, but for me, it was not so much about the world record. The main objective was to raise money and make a difference to children’s lives and inspire young people. And for me, we did that absolutely. It wasn’t a failure in any aspect.

For me, it was about why we were doing it, not what we were doing. So actually even though we were abruptly terminated, it was an amazing adventure. We had an amazing team and we raised nearly a hundred thousand pounds – so far it’s £89,000 at the moment.

So, I wasn’t the first, I couldn’t achieve my mission if we say that I was only trying to circumnavigate Great Britain, but actually for me, the objective was to build a school on the horn of Africa. And that’s what we can now do so it was a mission accomplished, a mission success as far as me and the team was concerned.

When you were doing the actual paddling, how did you get through the really tough days?

I think when you’re going on for that long period of time, firstly, as you say, ‘remember your why’. So for me, it was always on those days when I didn’t want to continue or I was too tired or fatigued or frustrated, it was always ‘remember why you started this’ and remembering those children. And then also at the same time, I think that one of the big things that I learned was that you won’t always be motivated in life, but what you can be is disciplined and that means getting up and getting on that board, whatever the conditions are. If it’s three o’clock in the morning, off the west coast of Scotland in the ice-cold waters, you have to be disciplined to go do it if you want to make progress. And I think the thing that I learned is perseverance. I was a brand new paddler. I’m not the fittest, I’m not the strongest. But what I did was kept going. And if you keep chipping away at a goal, you will get there in the end. And I think that’s the same in all aspects of life.

You don’t have to be the best, the strongest, the fastest, you’ve just got to be persevere and keep going and never give up. And I think that was a really important message in these tough times that we’re all going through with COVID too.

And will you continue to paddle for pleasure?

Yeah, I’ll continue to paddle for pleasure but probably on the rivers in the summer, not go to Scotland in winter! 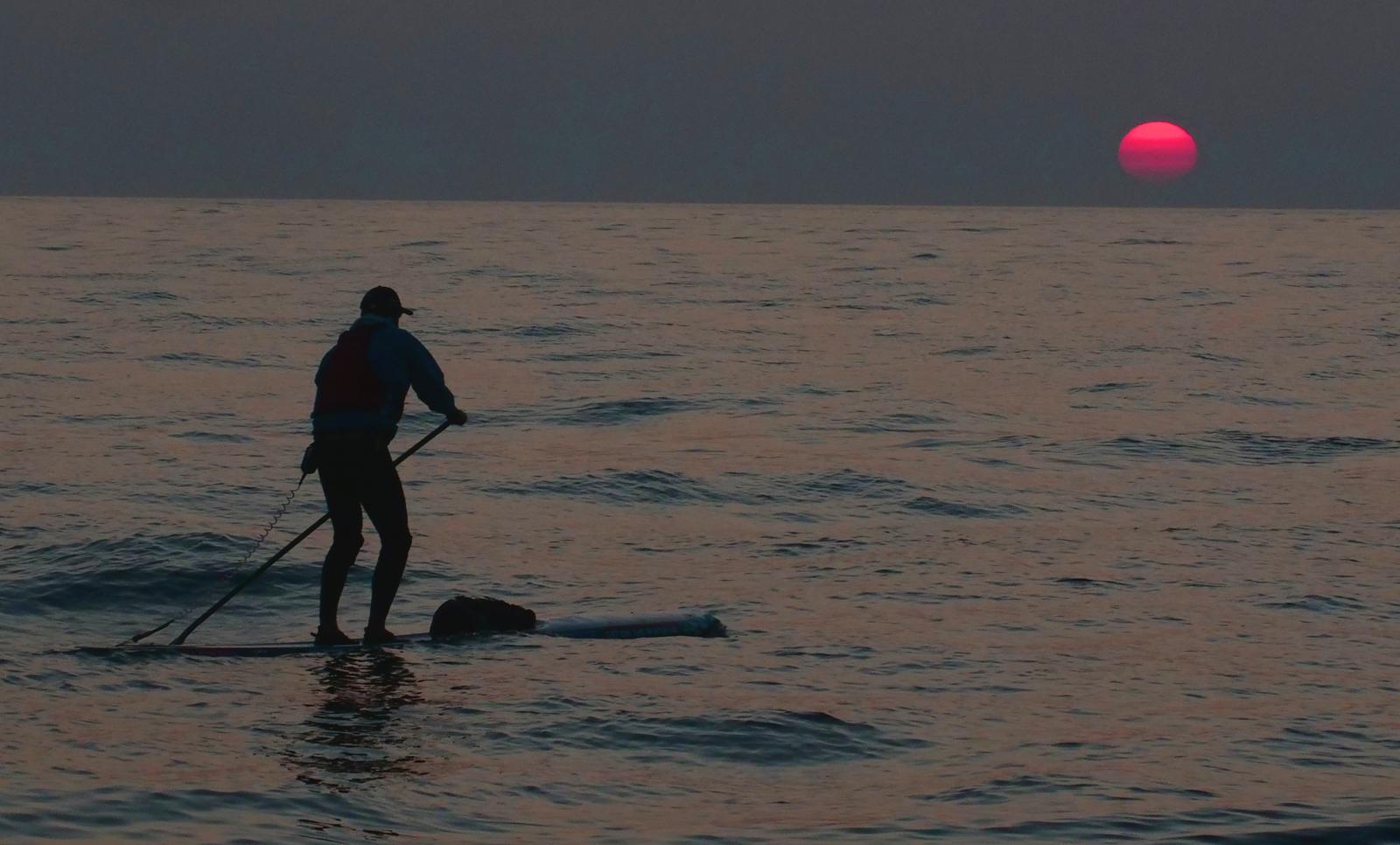 We certainly are! Jordan’s expedition and experiences go to show the strength, resilience and accomplishments that can be achieved when we put our minds to something and challenge ourselves. In the spirit of keeping in constant forward motion this is something we hope to inspire throughout all our community and having the opportunity to connect with people like Jordan is a great way to keep this message at the forefront of our minds. So why not set an intention to get out on the water… check out our full range of SHARK SUPs to help make this happen!

Meet Three People Changing the World from their PaddleboardCommunity & People