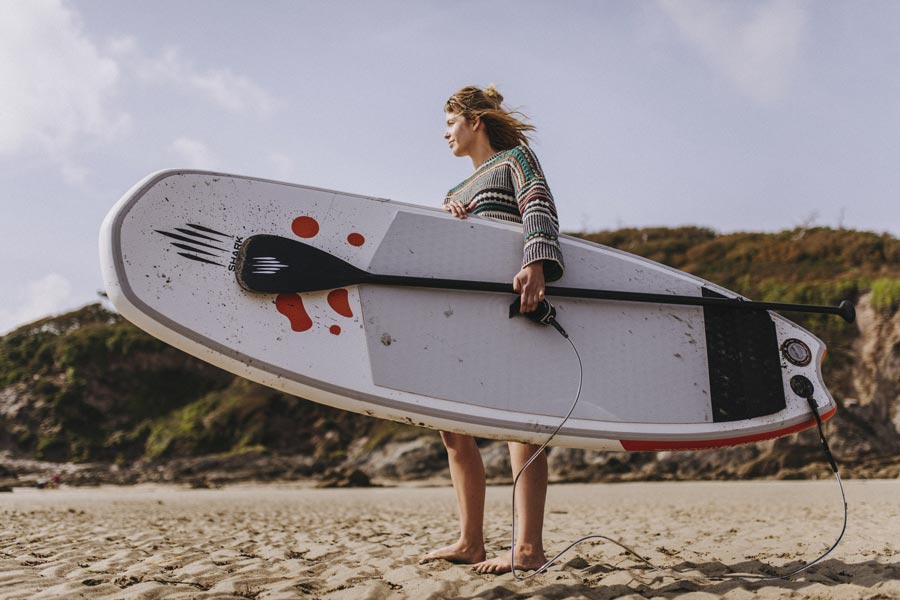 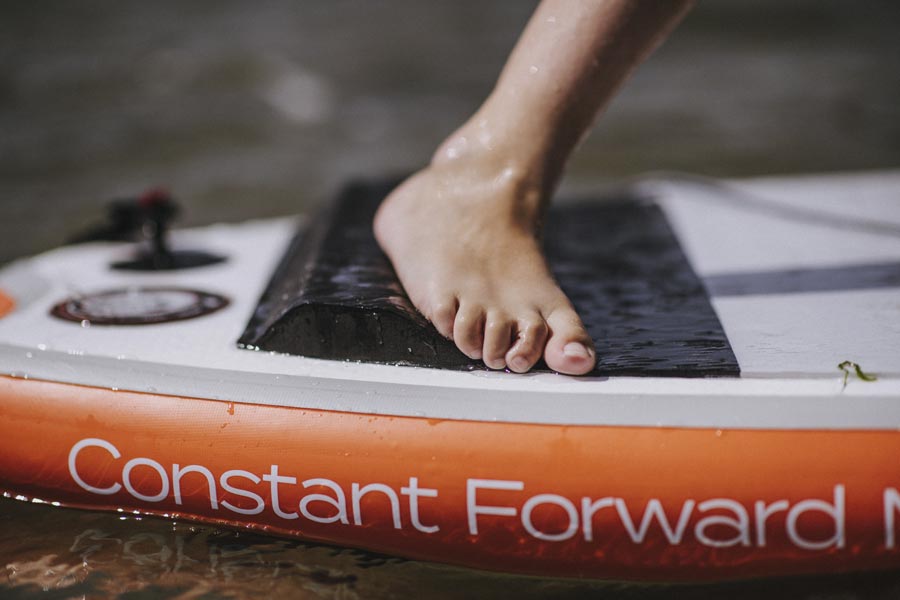 Optimised for paddlers between 50-80kg looking for a compact inflatable SUP surfing board for radical moves and top performance.

The 7’8 is small, light and very compact making it a fun board to surf up to head high waves on. Its outline shape with wide nose and tail gives excellent stability for its size, with its wide nose making wave re-entries easy. The boards fish tail and moulded fins give good grip on the wave yet allow for excellent manoeuvrability. Improvements for 2020 include increased nose rocker, removal of bungees, better positioned deck pad and the addition of the Shark Kick Tail (SKT) to help you make those radical turns. This board is designed to surf but can also be a great board for kids to use because its light, manoeuvrable and with its 2+1 fin setup tracks well.

The Shark SUPs Quick Fit fin System is a fast and easy fin system to secure your fin to your board without the need for screws, nuts or tools. Compatible with the SHARK SUPs US Quick Fix Foldable Fin Box, this is SHARK innovation at its best!

Shark Fusion Technology (SFT) is our inflatable SUP construction technology. SFT creates the optimum balance of performance and durability to ensure you have the best performing product that will last you the longest time.

Our Shark Kick Tail (SKT) gives you the rider the best possible feedback from your board to enable your board handling progression to be fast and enjoyable. The SKT includes an EVA foam kick pad for positive feedback to the rider when on the tail of the board, as well a different colour deckpad on the board tail acting as a clear visual indication of your position on the board.

Our quality high pressure valve is easy and safe to use. Making it fast and simple to inflate and deflate your board.

Drop stich is a key part of the materials that we build our paddleboards from. We use high quality materials, capable of withstanding up to 50-psi

We own and run our own factory allowing us to develop and control our own quality manufacturing processes in house. We have optimised these processes over the many years experience of manufacturing iSUPs. At our core, we are a manufacturing company looking to work in constant forward motion to deliver quality and innovation throughout our products.

We use high quality 0.7mm PVC throughout our products. This is the optimum mix of durability, performance and weight to give you the best paddling experience.

Industry leading 3 year warranty – register your product in our ecosystem to extend your warranty.

We use UV resistant materials where possible to ensure the durability of your board.

The Atlantic Sharpnose Shark has influenced our Surf SUP board range. Inhabiting coastal and shallow waters, often close to surf zones, this species of shark brings a unique pattern to our surf range.

The Atlantic Sharpnose Shark is a small coastal shark with a long-pointed snout and large eyes. Grey-brown in colour, they have white edges on their fins. Older sharks also have small pale spots. Underneath they are white. This counter shading is common in sharks and helps to conceal them from predators, and prey, from both above and below. Often found close to the surf-zone off sandy beaches. They can also be found in marine-brackish estuaries, enclosed bays and sounds.

Good for: Paddlers up to 95kg looking for a good beginner to intermediate dedicated surf SUP.

Good for: Paddlers up to 75kg looking for a good beginner to intermediate dedicated surf SUP, in addition to wanting to enjoy some flat water paddling.