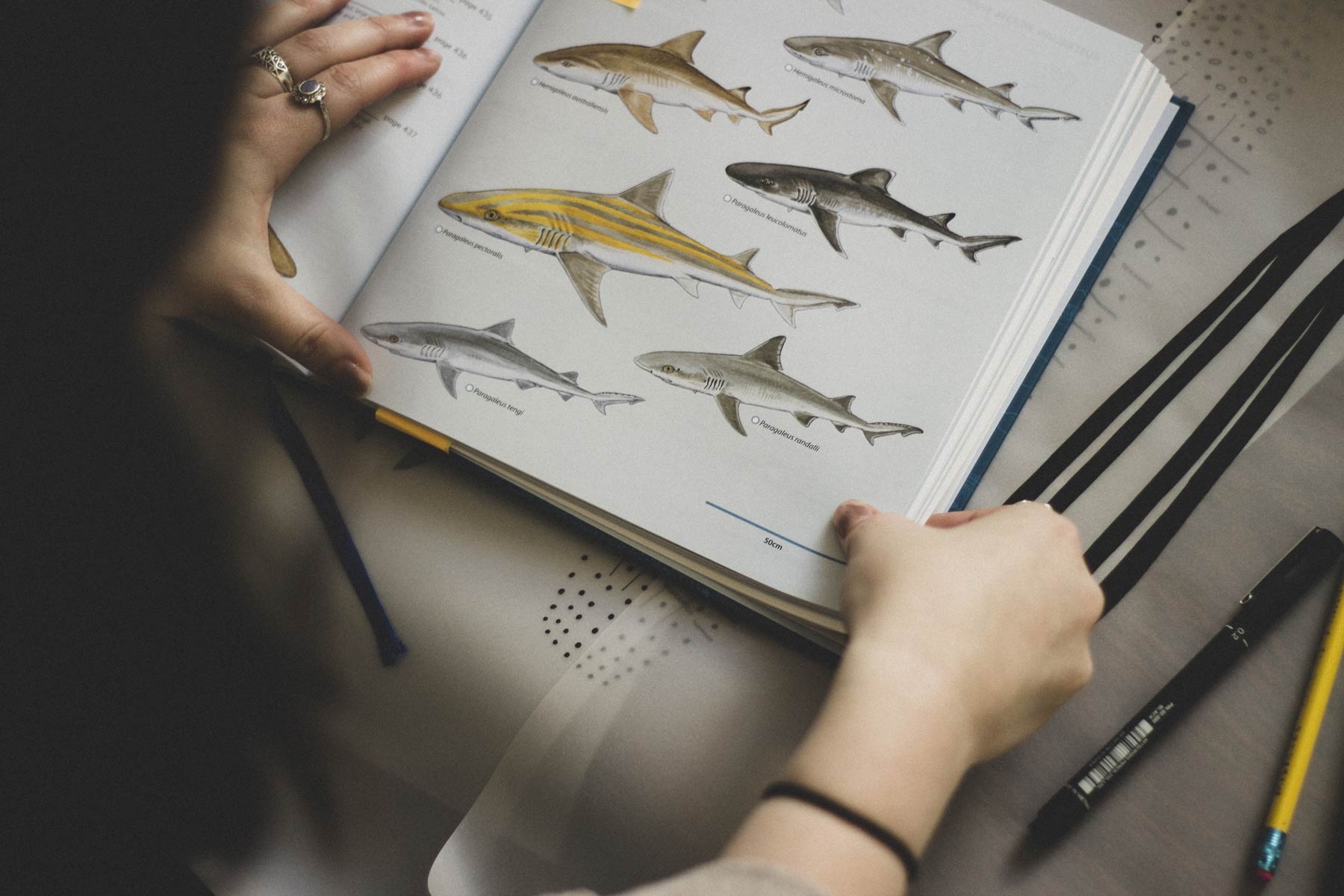 2019 has been a big year for SHARK SUPs and behind the scenes we have been working on some significant changes, which we are extremely excited to now be able to share.

One very big difference that we are extremely proud of is the aesthetic rebrand for our entire company and product collection. This has been a journey of learning for all and here we speak with our UK based, Creative Director, Simon Edwin, and Junior Designer, Lucy Moss, to find out what it’s been like for them to work on such an exciting project.

Since designing GEOSUP in 2016, an app for tracking standup paddleboarding sessions, Simon’s passion for paddleboarding has quickly grown. You’ll find him paddle boarding with family and friends most weekends throughout the year, on the coast and in lakes and rivers around Devon in the UK.

It’s not so much the adrenalin rush for me, it’s exploring new places not normally accessible and having a different perspective of what lies beneath me, all this made possible with a paddleboard.

Q: When given the brief of working with SHARK SUPs to help them rebrand what were your initial thoughts?

From a very early age, I’ve been interested in marine life and learning about the many creatures that live beneath the surface, particularly sharks. Being given a brief to create a brand for a SUP company called SHARK, combined three of my biggest passions: Design, Paddleboarding and Marine Life. It’s been the most enjoyable project in my 21 year career.

Q: What inspired the design of the new logo and strapline, constant forward motion, for SHARK?

The design team undertook a weeklong investigation into sharks, their characteristics, diversities and their 400 million year evolution to become an apex predator. We learned about shark skin which is formed from rows of tiny teeth called dermal denticles, and how they have evolved to make the shark not only more streamlined in the water, but how they help propel the shark forward. This helps keep the shark in a constant forward motion and increases oxygen passing through the shark’s gills.

We soon identified ‘constant forward motion’ as the perfect statement to represent SHARK SUPs as it relates not only to the sharks need for survival, but also the commitment the brand has made to make environmentally low impact products.

The Shark logo is a graphic and simplified representation of a single shark denticle. 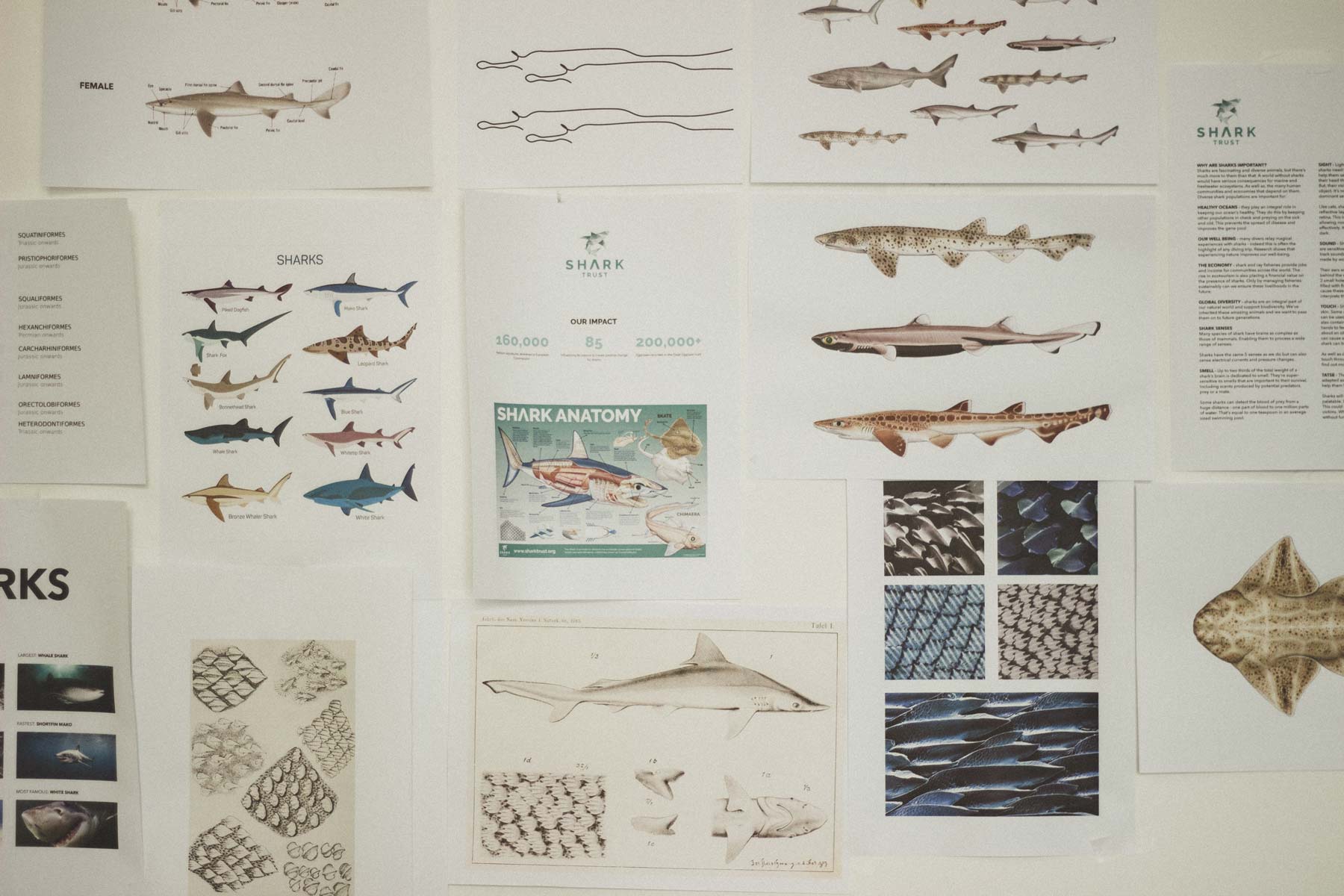 Q: How did you develop the design concept for the products within brand?

They helped us to identify certain species of sharks that have characteristics similar to SUP activities, be it surf, touring, race etc. We then selected the most suitable shark, with the most interesting skin markings, to represent each of the board categories.

The link between board and shark quickly became an exciting opportunity to continue to work with The Shark Trust in order to raise awareness for the importance of the shark in our eco system and to support the charity’s conservation efforts.

Q: What did it feel like to see the products you have graphically designed in the flesh at the photo shoot?

Seeing it all come together at the product photo shoot made the last 6 months hard work an amazing reality and probably the most exciting moment of my career.

Investing the time to perform research like we did has resulted in a brand with real depth as well as stylish products that will educate and inspire. This is then amplified with the relationship with the Shark Trust to raise shark awareness.

It doesn’t get much better. 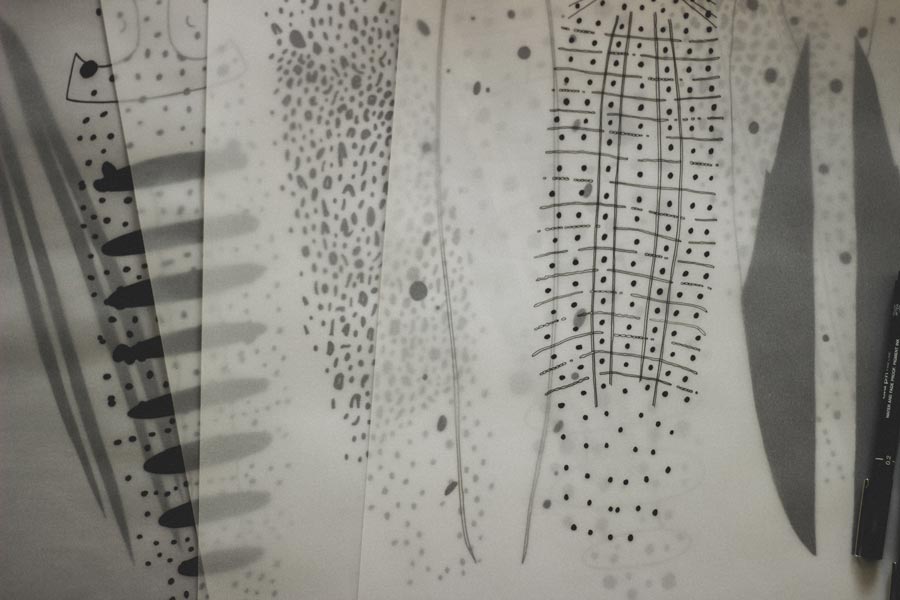 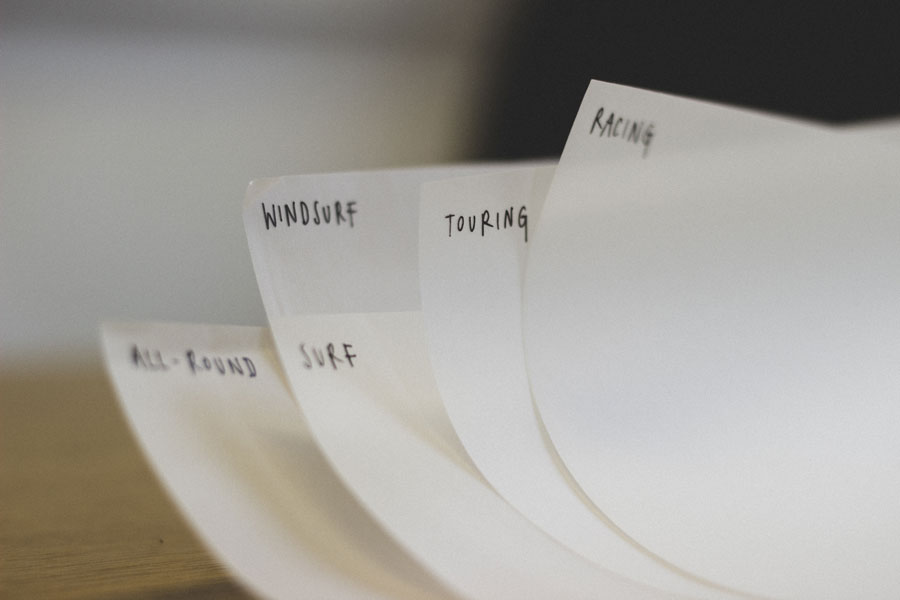 Having recently graduated with a 1st Class Honors Degree Lucy decided to stick around in the South West of the UK and has been working closely with Simon ever since. A keen photographer, lover of the outdoors and a sucker for a good view, Lucy has thoroughly enjoyed being a part of the SHARK SUPs rebrand project.

I’m super grateful to have had the opportunity to be involved in this exciting rebrand and working with such a diverse and well-skilled team. SHARK SUPs is forward-thinking and their mission and ethics not only encourage sustainability, but their partnership with The Shark Trust can push the education of the eco-system we paddleboard in.

What have you enjoyed about being involved in the SHARK SUPs rebrand project?

The SHARK SUPs rebrand project has been the biggest and most in depth client project I have jumped into since graduating, and what an exciting one its been! Throughout the process from start to finish, I have enjoyed learning new and interesting facts about sharks, the habitats they live in and all the beautiful different markings they have.

One of my favourite parts of the project was being able to use all this new knowledge gathered to select a shark which would represent a board well, looking at both the characteristics and technical features, and then being able to take those chosen sharks and illustrate their markings creating the SHARK 2020 collection.

What have you learnt by being involved in the SHARK SUPs rebrand?

Being involved in this project has enabled me to learn that sharks are awesome and so is paddleboarding! I have to admit before this project came along I had never tried paddleboarding before, but now I have had my first paddle (on a SHARK board of course!) and now I plan to make it a new hobby!

Why Stand Up Paddle Boarding should be one of your New Year resolutions!Company News